In an effort to be more environmentally friendly, we are debuting a primarily online format for Clue On Stage. We will have a large printed version on display in the theatre lobby as well. 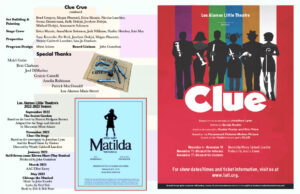 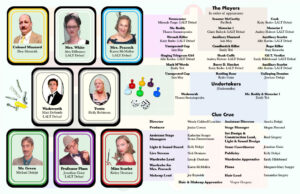 Get your tickets to LALT’s November show Clue On Stage here: Clue Tickets

NOTE: The description will contain links for tickets to the following shows: Sat, Nov 5 (Rocky Horror Picture Show double feature); Fri, Nov 11 (Veterans Night); Thurs, Nov 17 (Student Night). Because these shows include special discounts and/or options to purchase add-ons (like Rocky tickets), there are separate events linked in the description. 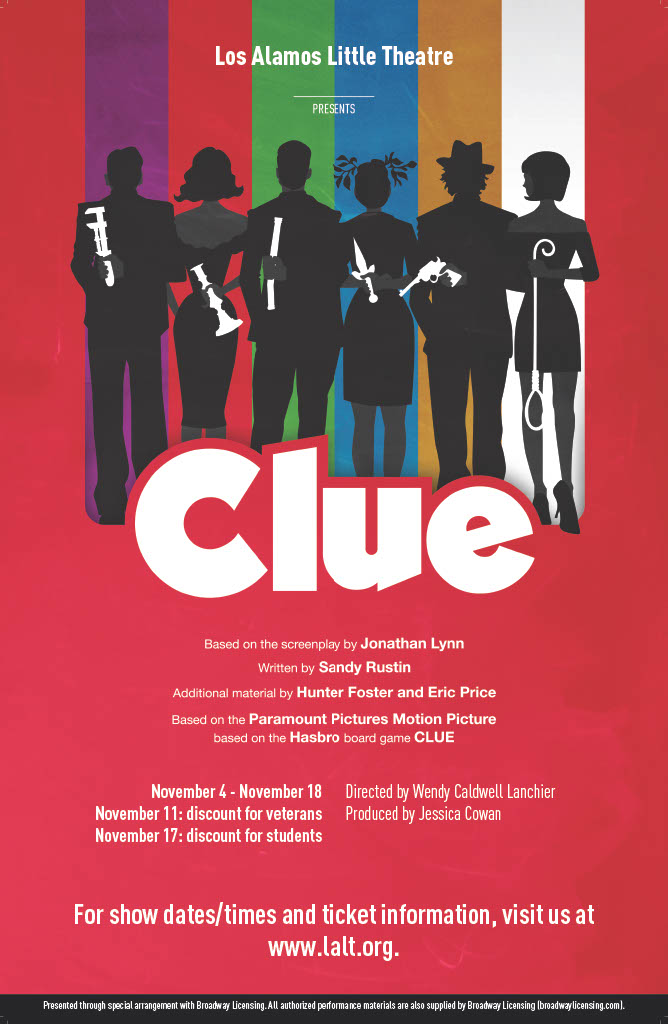 Play Reading — 8x10s: 7 Come 11
Los Alamos Little Theatre will host a reading of eight short plays at 7 pm, Tuesday, Oct. 4, in the Green Room at the Performing Arts Center, 1670 Nectar Drive.
The eight plays, written by local playwrights, will be performed by LALT in January 2023.
The short play format is a great opportunity for people who are interested in trying out community theatre or who maybe enjoyed theatre in high school or college and are looking to get back into it. The time commitment for line memorization and rehearsals is less than that required for a full-length play. And there are 24 available roles among the eight plays, so lots of opportunity. Tell a friend!!
The Oct. 4 reading is a chance to get familiar with the plays and consider parts that might be of interest. Or, just attend and enjoy the reading.
Auditions for the plays will be held at 7 pm Oct. 10 and Oct. 12 at the Performing Arts Center.
Scripts are available for perusal at the Mesa and White Rock public libraries. Access to a Google folder with the scripts can be obtained by sending an email to producer John Gustafson at johngus@cybermesa.com
The plays to be read and performed are:
Aliens, written by Stephanie Karr and Mark Watts, directed by Fred Berl
All Aboard!, written by Michael Burgan and directed by Kelly Dolejsi
Alphabet Soup, written by John Gustafson and directed by Terry Beery
An Unusual Bird, written by Vicky Meagher and directed by Jazmine Torres
Gun Play, written by Dale Dunn and directed by Valerie Lawdensky and Jazmine Torres
Necktie, written by Cunningham North and directed by Beth Harrison
Sleeping Through Armageddon, written by Tess Light and directed by Seona Zimmermann
The Tenth Circle of Hell, written by Fred Berl and directed by Megan Pimentel

LALT is proud to announce the start of the new season with The Secret Garden. There are plenty of opportunities to see this classic story unfold on stage. Don’t miss it! 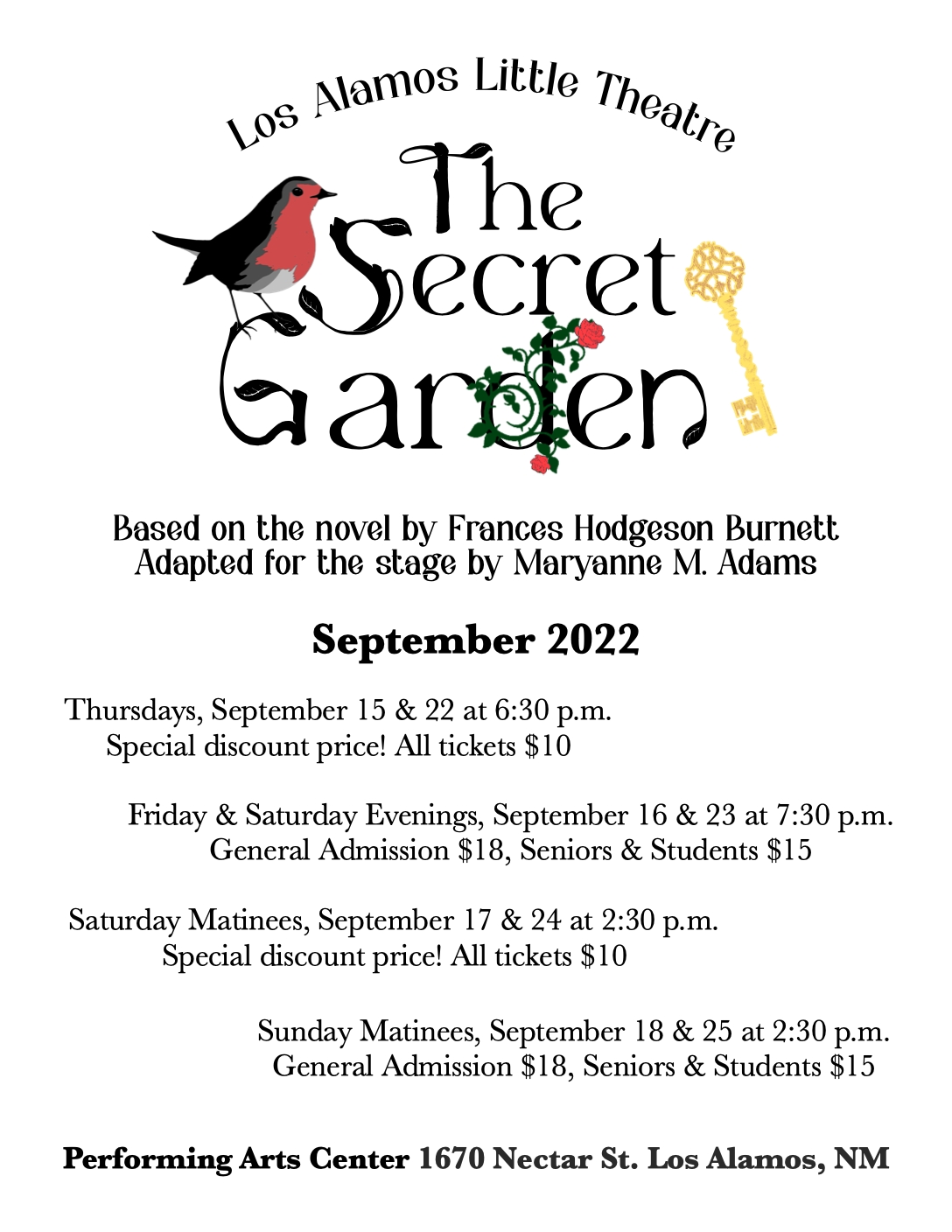 The Los Alamos Little Theatre is proud to present Clue for our November show. We will be having a reading of the script on Monday, August 15, at 6 p.m., in the green room of the PAC. People interested in being involved in the show are welcome to attend. The director will be available for questions once the reading is done. All are welcome!
Auditions for Clue will be Tuesday, Aug. 16 and Wednesday, Aug. 17 from 6-8 p.m., and by appointment. Please contact Wendy Caldwell Lanchier to schedule an alternate audition time (wendykcaldwell@gmail.com). Generally the director likes to end promptly; however, because this show may be very popular, if you arrive before 7:59 p.m. you will be allowed to audition, even if the line is long. Arriving at 6 is preferred for this reason.
Note: The director is aware that there may be cast overlap between Clue and Rocky Horror Picture Show. Please do not be deterred from auditioning. We are working to accommodate each other’s schedules.

Our long-awaited Valentine show is now The Summer of Love! Please join us for a concert-style revue of some of our favorite Broadway love songs from spectacular musicals including “Into the Woods,” “Camelot,” “The Sound of Music,” and many, many more!

This is a fundraiser for Los Alamos Light Opera! There will be a silent auction, and suggested donation for the event is $20. 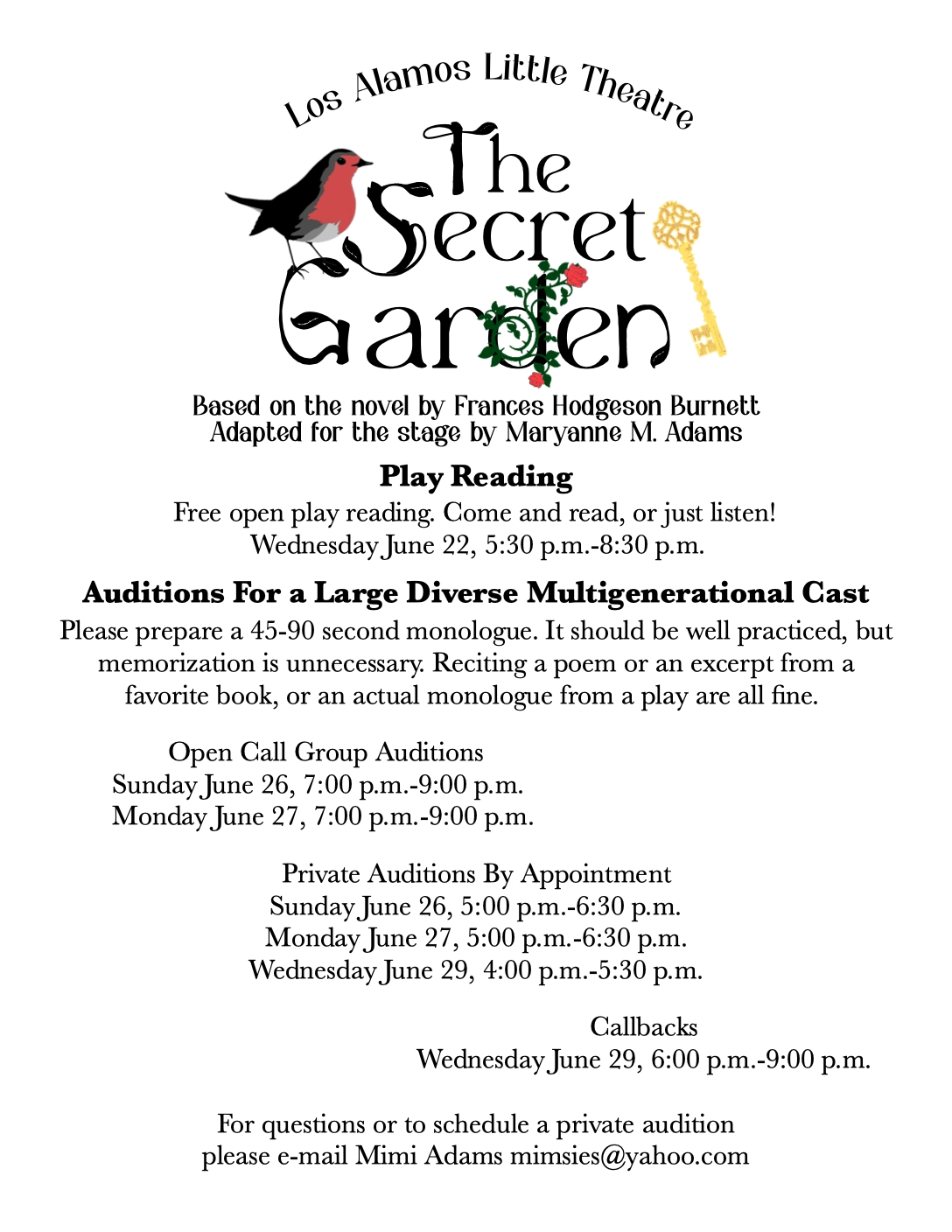 Los Alamos Little Theatre announces its Annual Membership Meeting on Saturday, June 18 at 1pm at the Performing Arts Center 1670 Nectar Street, Los Alamos, NM
Everybody is invited. Come meet your friends, make new ones, and recap a successful season after being dark for a year!
Dues are a bargain at $5.00 and entitles you to vote for the 2022-2023 Board of Directors.
Light snacks served.
The LALT nominating committee presents the following slate of candidates for the 2022-2023 Board of Directors:

You will be able to vote for a maximum of seven (7) members.  Holdovers from the current board are Linda Taylor, Eric Bjorklund and Megan Pimentel.